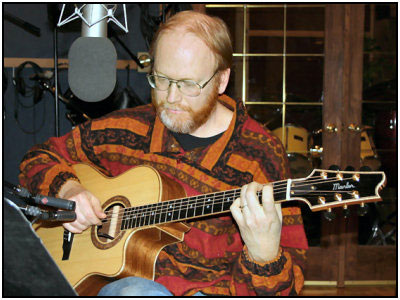 About the Music: "It is a favorite of friends and [small] audiences. Also, itâs in honor of Mike Marler who passed away shortly after building this instrument â he made some of the best guitars Iâve ever heard even though he was relatively unknown. There are about 50 out there â check one out if ever given the opportunity. "

The song was really one of those gifts from above that just seemed to âfall out of the guitarâ over the course of a weekend. It was cold and the middle of winter here in upstate NY. The imagery is a take your breath away, clear cold night â you can see the stars here and there, but there is a soft light snow gently falling. To me, this song just sounded like those snow flakes coming down â¦

Snowflakes â written for some good friends as the processional for their wedding. Have you ever stood outside and captured snowflakes as they swirl to earth only to discover that yes indeed: no two flakes are the same â¦ and yet so similar? What are the chances of any two meeting out of all the billions: uniquely individual, delicately sticking together?

Recording Information: "Recorded by Peter Hopper at Masterview Recording Studios during a session with two other Marler Gutars owners working on a tribute CD for Mike Marler. The recording itself was a happy accident. My low âEâ string was a bit dead from the previous week of going back and forth between âdropped Dâ and standard tuning. It added a slightly muffled quality to the bass notes that seemed just right â the way sounds are quiet and hushed after a heavy snowfall .. yet the high notes are still bright and twinkley. "

Tuning: "DADGAD tuning, Capo 5th fret. DADGAD tuning really helped me make the transition to composing. I resisted open tunings for years assuming that there was more than enough to learn in just standard tuning (there is!). But once I tried it - I was hooked. The freshness of the new sounds and all the open strings to support melodies higher up the neck seemed to open the floodgates for me. As a bonus, this required an additional guitar to dedicate to open tunings."

The latest Acoustic Guitar Forum release includes 16 beautiful tracks from artists from around the world.

Get your copy today!

Listen to the Acoustic Guitar Forum CD's on Last.FM

AGF CD Volume 1 gets More airplay!
Acoustic Guitar Forum CD Volume 1 was played once again over the weekend on CKLN FM radio in Toronto. Congratulations to artists Joe Barbieri, Darryl Noda, and James Filkins, who were featured among artists such as Joni Mitchell during the Acoustic Routes radio show. Huge thanks to show host Noah Zacharin for playing our tunes!
[]